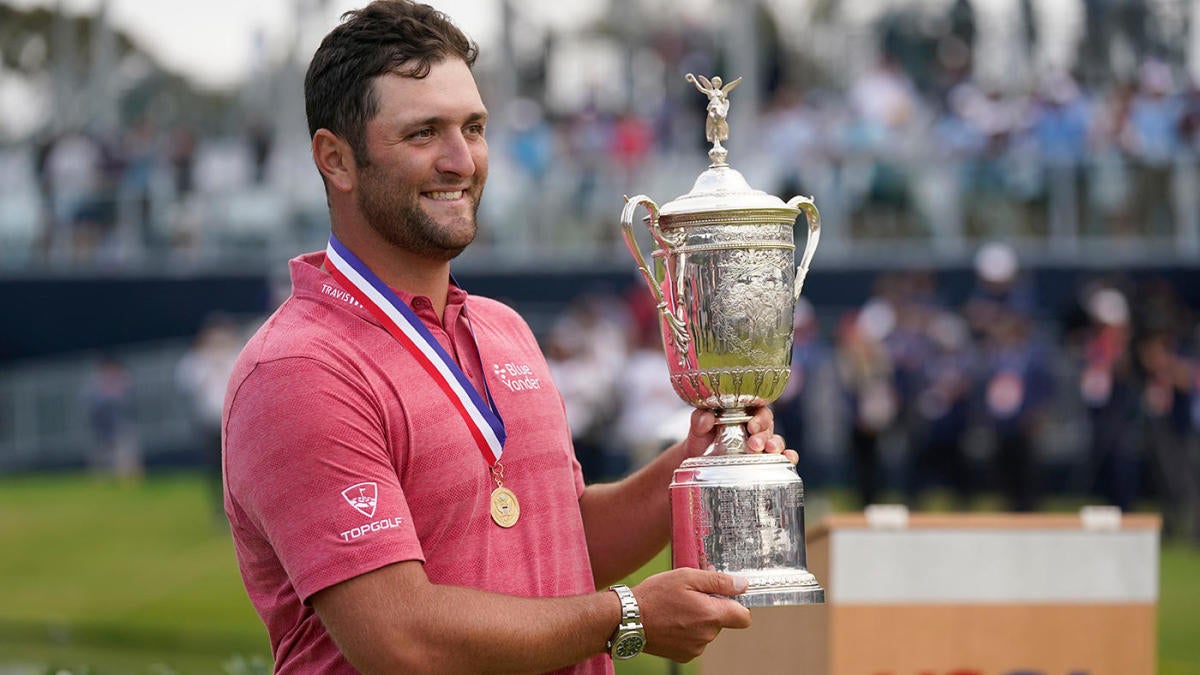 LA JOLLA, Calif. — Jon Rahm has been the most consistently great golfer in the world for most of the last half-decade, and now he has a trophy to prove it. After winning the 2021 U.S. Open about as dramatically as one can win a major championship, Rahm’s reality finally fell flush with the expectations that were foisted upon him as a 20-year-old wunderkind at Arizona State.

Rahm is 26, so it’s not as if an entire career of missed opportunities had passed him by, but when Phil Mickelson once bet a healthy amount of money on you to move from outside the top 700 to inside the top 10 in a 12-month span, it’s safe to say that backdoor top 10s at major championships are not going to cut it.

Coming into the week, Rahm had stacked up a bevy of them. Seven in 19 career major starts. But he was not truly in contention for any of those titles late on a Sunday when it’s legacy time and everybody brings whatever they have in the weapons chamber to one final melee.

On Sunday, that fight was between the best in sport. Rahm started three back of the lead, but he had some big problems in front of him. Louis Oosthuizen, Russell Henley and Mackenzie Hughes co-led at 5 under through 54 holes, and Rahm had defending U.S. Open champion Bryson DeChambeau and four-time major winner Rory McIlroy between him and the trophy. He also had lions behind him. Dustin Johnson, Collin Morikawa, Justin Thomas and Brooks Koepka all inserted themselves into this championship at different points on Sunday afternoon.

Rahm’s 3-3-3 start on Sunday was badly needed as he played his way into the top of a tournament he had been favored to win before festivities began and after both 18 and 36 holes. His 33 on the front nine jolted him right into contention with half a round left.

Then a U.S. Open finally broke out at the U.S. Open. Absolute pandemonium. A man wielding a golf club ran onto the 13th hole and hit a ball into the canyon at Torrey Pines before being tackled by a police officer. Hughes hit a ball off a path and onto a tree branch. DeChambeau hit one off a 12-pack of beer.

A straightforward week at a straightforward golf course suddenly seemed like it was being played in a zero-gravity dome. At one juncture, there were a dozen folks within one stroke of the lead, and most of them had a single digit in their world ranking column. Thoroughbreds all, of which Rahm is one.

And Rahm (of all people!) stayed the steadiest. It was the one-day manifestation of his five-year reign in the sport.

He pounded eight of nine greens in regulation on the back nine and gave himself look after look at birdie. None of them fell until the end when two of the best putts you’ll ever see at a major fell with emphasis. The first came from 24 feet at the 17th hole, and Rahm punctuated it with a right hook that would have put DeChambeau in traction.

“Not that I was really thinking about it on 17, but last time I won here, I finished birdie-eagle, and I knew I could finish strong again,” said Rahm. “I knew history could get close to repeating itself. I was aware hitting that putt.”

The one at the closing hole felt even more surreal. After pitching out away from the flag and the pond on No. 18 on his third shot, Rahm had 18 feet for birdie and what he had to believe would be enough for major No. 1. He buried that one as well, and the uppercut would have put Koepka in a bodybag.

“I looked up and saw where the ball was going,” said Rahm. “It was exactly the speed and line I visualized, and I told myself, ‘That’s in.'”

Great champions always put on a cloak of inevitability at some point in majors like this one. After Rahm guided the putt on No. 17 right into the heart, the entire thing felt over despite Oosthuizen being tied with a few holes still to play. Patrons up and down the 72nd were treating Rahm as if he were already the champion, and it felt — though we didn’t exactly know how — that he would emerge with the trophy.

It’s a strange thing to describe, but the air of certainty was undeniable. Oosthuizen stumbled home behind Rahm by hitting one out of bounds on No. 17, and that was the “how.” Oosthuizen had been 7 under on the final three holes before he shot them in even par Sunday.

Torrey Pines is not necessarily an elite major venue for myriad reasons, but it produced a properly memorable major championship this week. And it was fitting that, when a 10-Lamborghini pile up between the best this sport has to offer occurred Sunday, the most spectacular vehicle among them emerged unscathed.

Jon Rahm has quietly (and somewhat invisibly) been the best golfer on the planet for a long time. He loudly declared it on Sunday with a 1-2 finish that will be replayed for the next 25 years.

“I’m not going to lie,” said Rahm. “I was trying not to look at the leaderboards, but the crowd was not cooperating. They were telling me exactly what was going on. So I decided to embrace it. You see all those great names, and to myself, I thought whoever wins this one is going to be the one who won a U.S. Open with a star-packed leaderboard.”

There are a variety of ways to measure greatness in golf. In the long-term, strokes gained is a valuable statistic. It makes it easy to see who is the best player over the longest period of time. Tiger Woods used to double and triple other players’ strokes gained numbers when he was in his prime. It meant he was twice or three times as good as good players when compared to the rest of the field.

Rahm has owned that stat for five years. Coming into this week, Patrick Cantlay led the world in strokes gained over the last month, Morikawa over the last two months. But if you go back to three, four, five and so on to the last 57 months, Rahm was your leader. You have to go back to the last 58 months before somebody else (Johnson) takes his place in that statistical category. Rahm has been the most consistently great golfer over the largest swath of time in professional golf for several years.

But statistics like those are for nerds like myself, not for the masses. Folks who tune into golf casually want to know how many of the most important events you have won. In golf, that’s the Masters, the PGA Championship, the Open Championship and the U.S. Open. Rahm had not won any of them. He had not really come close, either.

Those inside of golf know this is a sometimes-empty way to determine greatness because insane things can (and often do) happen at majors, but it’s nice now that Rahm’s major collection matches how good the statistics say he’s been. Each side has less explaining to do to the other.

The Data Golf folks, those who produce the best strokes-gained numbers, maintain that the models they run and the projections they make about the future only spit out one name at the top and have for a long time. The Tiger comps during Rahm’s meteoric rise as a pro are inevitable, but they’re actually also not all that crazy! Rahm has now finished first, second or third in 27 of his first 122 starts in OWGR events. That is outrageous.

After his win, Rahm compared Torrey Pines to his home country of Spain. He loves it here at Torrey.

In an imperfect week of yelling about course architecture, major strategy and those damn paragliders, the U.S. Open finally found its kicker, and Rahm gave two of the greatest fist pumps in recent major history.

“This one is very, very incredible, very hard to believe,” said Rahm. “… It almost feels like it’s a movie that’s about to end and I’m going to wake up soon. … I do love Torrey Pines, and Torrey Pines loves me.”

Rick Gehman is joined by Greg DuCharme, Kyle Porter and Mark Immelman to break down and react to the 2021 U.S. Open at Torrey Pines. Follow and listen to The First Cut on Apple Podcasts and Spotify.

A history of house distinction