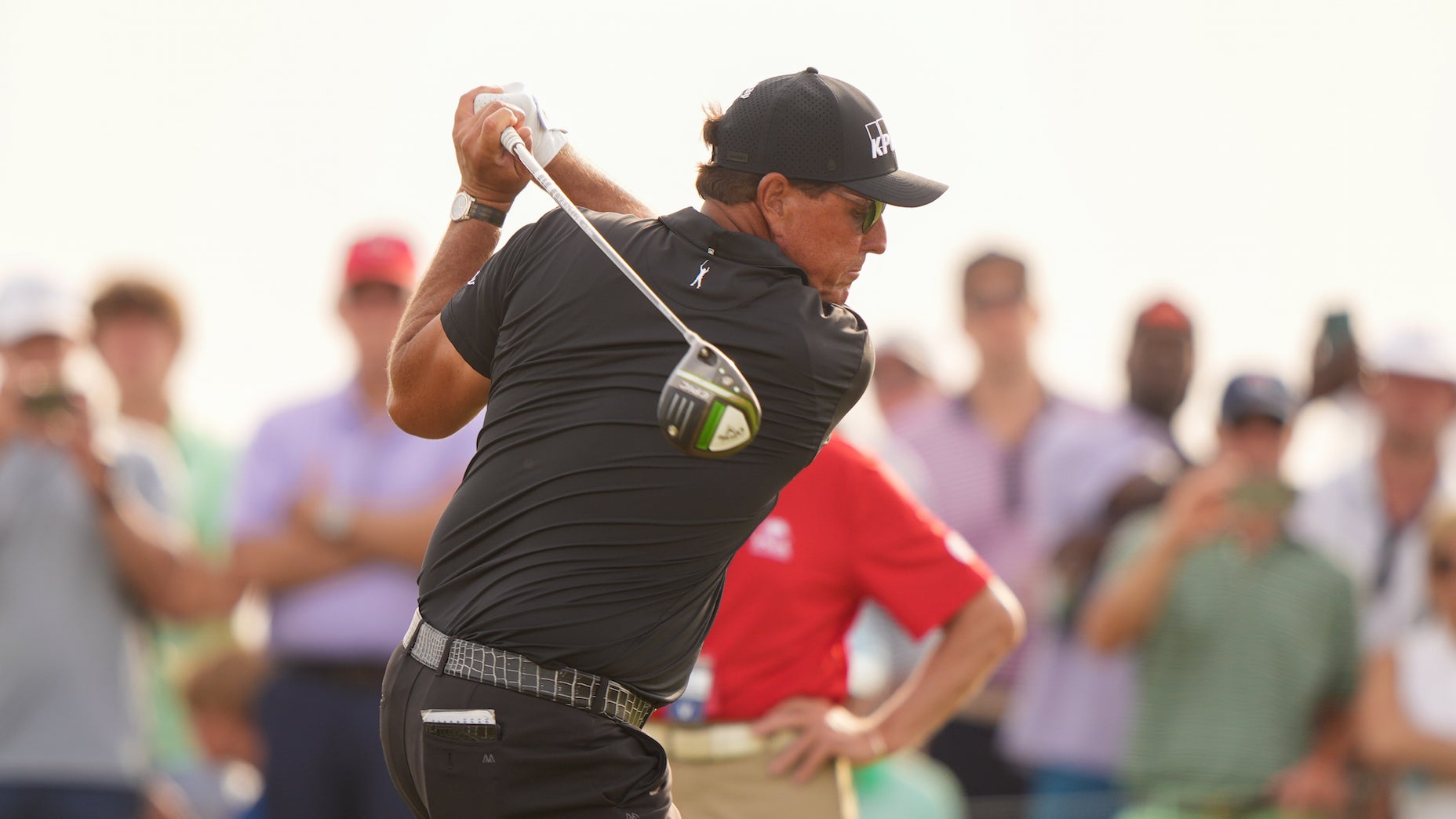 Phil Mickelson is looking for major No. 6 on Sunday.

The following article has been updated from its original version published in August 2020. Want to overhaul your bag for 2021? Find a fitting location near you at GOLF’s affiliate company True Spec Golf.

At 50 years old, Phil Mickelson finds himself with a one-shot lead over Brooks Koepka heading into Sunday’s final round at the 2021 PGA Championship at Kiawah Island’s Ocean Course. With a win this week, Mickelson would pocket his sixth major victory and become the oldest major winner in golf history.

Throughout his career, Mickelson has played golf fearlessly; he’s not afraid to hit any shot or do things differently. The same goes for his equipment. He’s willing to try anything, such as playing with two drivers, or with no drivers, and he’ll put lead tape just about anywhere on his clubs.

On a previous Fully Equipped podcast, Mickelson’s longtime Callaway clubfitter, Gerritt Pon, joined the show to discuss Mickelson’s unique gear-testing process. As you’d probably expect, he doesn’t do things according to the norm.

Lucky for us, we can learn a lot from Mickelson’s process when it comes to testing new clubs. Here are three things Lefty does that can help you during your next club-testing session.

Given Mickelson’s caliber of ball striking throughout the years, you wouldn’t expect to see him even try game-improvement irons, let alone put them in the bag. According to Pon, however, that’s business as usual.

Pon says that just about every time Callaway comes out with new clubs – whether they’re made for high-handicappers or not – Mickelson gets a set to try. Due to Mickelson’s feels and swing tendencies, Pon says he hits game-improvement clubs well because of their CG (center of gravity) locations, upright lie angles, and draw-biases.

“For the whole season this year he’s been playing [long irons] that you would typically see in the ‘Silver Flight’ of the country club member guest tournament; that being the Epic Forged irons,” Pon said. “That’s a club you would find in a 10- or 20-handicapper’s bag usually.”

So, even if you’re a better player, don’t just assume you should play a certain style of head because of your handicap. Give everything a try and see what actually works for you. That’s what Mickelson does.

2. Take it to the course

Since Mickelson lives close enough to Callaway’s Carlsbad testing center, Pon says Phil is able to stop in fairly regularly. When he does so, however, he’s not just there to test on the range and get Trackman numbers to determine what clubs are best. It’s not that Mickelson avoids Trackman completely, but Pon says that he relies on testing on the actual golf course to get a feel for new clubs or adjustments.

For someone as inventive with his shots as Mickelson, I suppose this isn’t surprising.

“He’ll take [different iron sets] and start doing some trial work on the course with them,” Pon said. “Sometimes he’ll do a little bit of testing here at the test center, but not a ton. It’s more like, ‘OK, here are the clubs, let me go play with them. I’m going to give you some feedback, and based on that feedback we’re going to make some adjustments to it.’”

This could be a helpful mindset for golfers who tend to get too focused on Trackman numbers and forget about performance on the course itself.

3. Don’t forget about the putter

The proper fit and build on your putter can be just as important as it is on any club in your set. And think about how often you use the putter!

Mickelson, who has used lead tape on the hosel of his putter in the past, has left no stone unturned when it comes to dialing in the flat stick.

Bonus fact: Pon confirmed that Mickelson applies lead tape on his own clubs himself!

Hopefully Mickelson’s testing process helps you during your next session. For more insight on Mickelson’s equipment, check out the full podcast interview with Gerritt Pon below! Andrew Tursky is the Senior Equipment Editor at GOLF Magazine and GOLF.com.