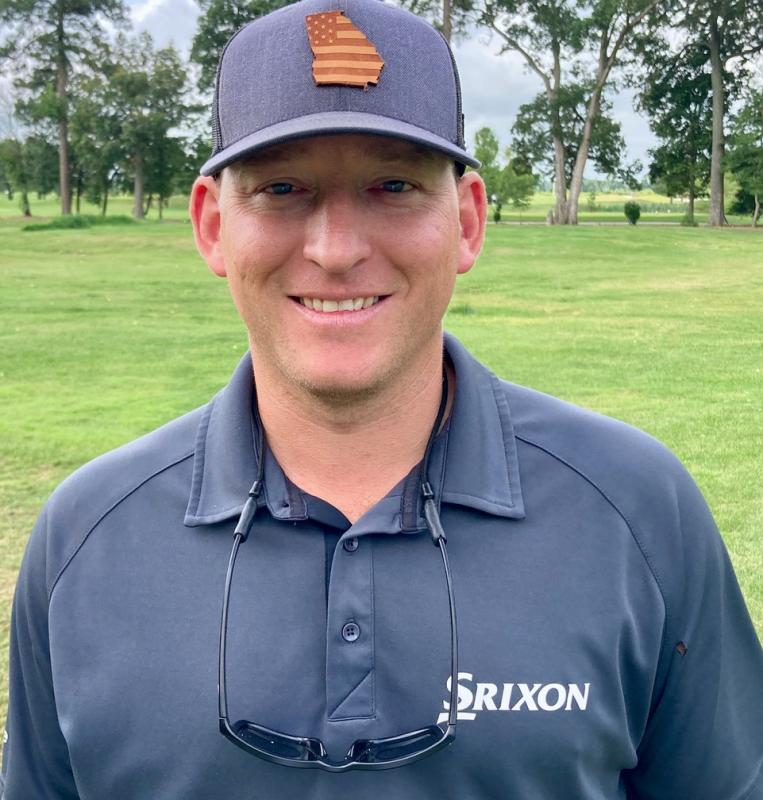 Many golfers consider buying new clubs as the season nears its end. At that point, their swings are sufficiently repeatable that they should make better equipment decisions.

Club makers are happy to oblige, which is why Cleveland Golf’s Scott Pugh made the day trip south from Harrisburg, Pa., to The Rookery’s practice range Aug. 17 for a clinic featuring the well-regarded company’s wedges.

Pugh, 33, graduated from a Harrisburg high school and played for its golf team. He was twice a Division III NCAA All-American while competing for Oglethorpe University in Atlanta, Ga. Oglethorpe won the 2009 DIII national championship with Pugh contributing.

He played the Peach State, eGolf and Dakotas mini tours for a few years, and worked as a junior golf instructor and high school golf coach after that experience. Pugh also worked as an assistant golf pro before joining Cleveland in 2018.

For his clinic, Pugh set up a table stacked with boxes of Srixon golf balls adjacent to two large staff bags filled with Cleveland clubs. He chatted with Kyle Deas, The Rookery’s head pro, and then addressed his clinic audience.

He began working with Rookery regular Joe McDonnell, who was looking for a lob wedge. Those clubs typically feature lofts of 60 to 62 degrees.

McDonnell made several shots with his current wedge, a TaylorMade R7, under the watchful eye of the Cleveland rep. Several clubs came out of Pugh’s staff bags as McDonnell tested them, some more successfully than others.

After several swings, Pugh explained to McDonnell that he had a “dynamic loft issue” with his swing. McDonnell added loft at impact, making the ball go higher but shorter than desired. Pugh suggested McDonnell should use the CBX2 wedges at 48 and 56 degrees instead of a high-loft lob wedge.

When it was my turn, I sought Pugh’s opinion about upgrading from my Cleveland RTX4 wedges, last year’s model. After several full wedge shots with my 50- and 58-degree clubs, he suggested no changes were necessary.

He then gave me an impromptu lesson on how to make low-running chips. The new technique worked well after several miscues, but more practice is needed before I incorporate it into my usual game.

Deas began a junior clinic a few yards away just as Pugh’s clinic session ended. Pugh, who has a 4-year-old daughter/budding golf partner, walked over to encourage the youngsters and hand out new Srixon golf balls.

His return trip to Harrisburg was delayed a bit, but from my perspective was for a good cause matched with good marketing sense.

Deas added, “Getting fit for a wedge is extremely important.  A golfer doesn’t want to have too big of a gap in wedge distances.  These are your scoring clubs, and they need to be dialed in.”

The Trinity Foundation will hold its 15th annual Golf Tournament Saturday, Sept. 25, at the Heritage Shores Golf Course in Bridgeville.

The funds raised by the event support community organizations and events focused on local necessities, youth leadership development, and health and wellness in Sussex and Kent counties of Delaware and Dorchester and Caroline counties of Maryland. It is also the foundation’s biggest fundraiser each year.

The four-player scramble format event begins with registration at 7:30 a.m. and a shotgun start at 9 a.m.

The entry fee per player is $125, and the foundation is seeking not only players but also sponsors.

The Lewes Historical Society will hold its second annual Golf Tournament Classic at The Peninsula Golf & Country Club Thursday, Oct. 7. The event supports the society’s programming and other expenses.

A pickleball tournament is also scheduled for the Peninsula’s courts at the same time, with a clinic, breakfast, and more for $125 per person or $225 per two-person team.

Sponsorship and player opportunities are still available. For more information, go to historiclewes.org/events.

Maxine Ansbach came in second on the front nine. JoAnn Petrie took second on the back nine, and Peggy Clausen finished second for the total 18.

Game all the time